Trombonist, Artistic Leader of Serikon and Artist-Researcher in Musical Performance

My name is Daniel Stighäll and I am a musician, mainly playing different kinds of historical trombones as well as medieval slidetrumpet and the traditional swedish cowhorn (all this can be heard on the soundtrack above). In 2009 I started my ensemble Serikon with which I produce my own concert projects. These programmes consist mainly of historical music – medieval, renaissance, baroque and early classical – but also contemporary works commissioned for Serikon. Since february 2015 I am an artistic PhD in musical performance at the Technical University in Luleå and the faculty of Art, Communication and Pedagogy.

Apart from this, I work as a freelance musician, producer and pedagogue

Improvisation over Standards from the Renaissance,

”Daniel Stighäll’s trombone playing is both as sensitive as it is agile.”

”Of particular note is Stighäll’s exceptional playing in the Pulchra es amica mea by Palestrina… Those who think period-instrument recordings are inherently flawed should listen to this CD; the playing is first-rate throughout.” (David Mathie review of ”Along uncharted routes” – International Trombone Association Journal)

Some examples from my recordings and concerts 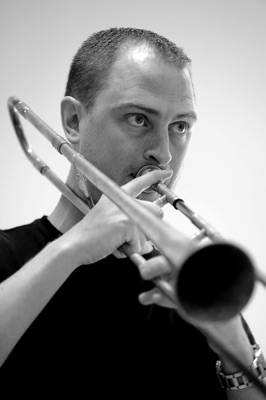